Luxury clothing houses have long valued direct personal interaction through their boutiques and fashion shows. Perusing the sumptuous goods in a shop, with a glass of champagne in hand, promises a superior consumer experience to the mundane act of ordering online, and sitting front row at a catwalk remains a […]

Luxury clothing houses have long valued direct personal interaction through their boutiques and fashion shows. Perusing the sumptuous goods in a shop, with a glass of champagne in hand, promises a superior consumer experience to the mundane act of ordering online, and sitting front row at a catwalk remains a coveted status symbol.

That’s why there’s more on display than the latest looks at the September fashion weeks that are getting under way in London, Milan and Paris. This year, they’re a proving ground for just how successfully the industry has reinvented itself for the age of social distancing to push its message and products through digital channels.

Burberry Group Plc’s show on Sept. 17 provided a snapshot of the challenges that await. A walk-up segment featured celebrities including supermodel Bella Hadid and soul artist Erykah Badu engaged in a halting conversation on the Twitch streaming platform. The actual show — without guests — was staged in a forest as a bold blend of postcard English country life and contemporary angst. Models stalked forth among the trees, while performance artists created a brooding backdrop that left some online viewers bewildered, calling it “satanic” and “creepy” in live-stream comments.

Chief Creative Director Riccardo Tisci’s attempt to take the storied British brand out of its comfort zone of trench coats and Burberry plaid highlights the extra effort needed to interact with a fan base that is following the proceedings from tiny screens at home. The luxury-goods industry has been particularly hard-hit by the Covid-19 pandemic, as high-rolling shoppers stay home, boutiques remained shuttered for months and more consumers migrate to online boutiques that many brands long eschewed.

“These are maisons which know how to do events and beautiful shows, and all of a sudden they have to reinvent their work to create an online experience,” said Anne Michaut, a marketing professor at business school HEC Paris. Most brands “have a century or half a century of know-how for shows. Obviously we don’t have this amazing experience in digital.”

Fashion shows have traditionally functioned as an important branding catalyst. There’s the buildup ahead of the event, with paparazzi chasing celebrities and models across Paris or Milan from one event to the next. Who sits where in the front row is fodder for endless gossip, and the shows can be infinitely recycled afterward in fashion magazines and online.

Staging the events is a huge logistical and financial undertaking. Chanel’s shows, in particular, are the stuff of legend. The Paris-based house routinely rents out the giant glass-domed Grand Palais in the French capital, where models in years past strutted among installations including a space rocket, a supermarket or an intricate replica of a French brasserie.

Chanel will return to the same venue this year, but the company hasn’t yet revealed details of the show, due to take place on Oct. 6. Neither has crosstown rival Dior, part of the LVMH luxury emporium. The French brands are holding out any announcements as virus cases spike again in the country where haute-couture was born, potentially forcing them to switch gears and go digital at the last minute.

Others are more sanguine. Italian silk-and-leather specialist Salvatore Ferragamo SpA plans to hold a physical show “to give a sense that business is back to normal,” according to Chief Executive Officer Micaela Le Divelec Lemmi.

Companies are trying to blend physical and online offerings to reach VIPs and the fashion press. Prada SpA will stage local private screenings as well as virtual viewing events of its Sept. 24 show, while Victoria Beckham in London will host a select number of journalists and celebrities by appointments only in a two-hour time slot before releasing her collection on film the following day.

It’s not necessarily a natural transition for brands that are still building their following. Many have long placed the focus on connecting directly with their client base, emphasizing the tactile experience of high fashion, said Jillian Xin, a buying director for Labelhood’s stores in China.

“With fashion, there’s a limit to how much can be replaced digitally,” said Xin, a regular attendee of Europe’s fashion shows in the past. “It’s a little easier for brands that we’re already familiar with, but for new brands, it’s important to see the collection in person, to touch and feel the clothes and build a relationship with the designer and their team.”

It’s not just the fashion houses that have to come to terms with the new pandemic reality. The cities that host the shows will also lose out on the spending circus that accompanies the events, from the priciest hotels to the hottest dinner and cocktail venues for the after-show parties.

For Milan, the drop in visitors during the fashion week will have an noticeably impact on the city economy. At the mid-point of the month, hotel bookings hadn’t experienced the surge that the event generated in years past, hovering instead at an occupancy rate of about 25%, according to Maurizio Naro, the chairman of the local Federalberghi hotel owners association.

Maison Valentino, among the biggest names in Italian high-end fashion, decided to host its show in Milan this season rather than in Paris, where it had traditionally presented its spring/summer collection. The company called the decision “more ethical” because it strengthens its identity and affiliation with the local and national economy.

While the pandemic has forced fashion houses to embrace a new channel, the risk is that brand value will suffer the longer they float in the fleeting digital universe.

And just like spectator-less soccer matches are a joyless affair, the absence of an audience at the shows stands to diminish the events’ impact, said Michael Jaïs, the head of technology platform Launchmetrics that tracks social-media data for brands.

“Celebrities and influencers won’t be present, and it’s hard to imagine that they’ll be followed as much when they’re just in front of their screens,” Jaïs said.

Before it’s here, it’s on the Bloomberg Terminal.

Fri Oct 9 , 2020
Saul Loeb/Pool via AP Dr. Robert Redfield, director of the Centers for Disease Control and Prevention (CDC), testifies during a Senate Appropriations subcommittee hearing on the plan to research, manufacture and distribute a coronavirus vaccine, known as Operation Warp Speed, July 2, 2020, on Capitol Hill in Washington. By Mike Stobbe, […] 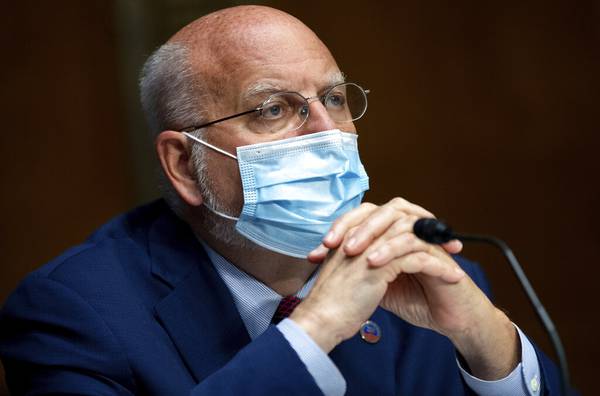