Marks & Spencer will axe 7,000 jobs over the next three months, delivering another blow to the struggling UK economy as the pandemic changes the way people work and shop. The venerable UK retail chain, which sells clothes, food and household goods, said in a statement Tuesday that cuts to […]

Marks & Spencer will axe 7,000 jobs over the next three months, delivering another blow to the struggling UK economy as the pandemic changes the way people work and shop.

The venerable UK retail chain, which sells clothes, food and household goods, said in a statement Tuesday that cuts to its 78,000-strong workforce will be made in support functions, in regional management and in its UK stores, “reflecting the fact that the change has been felt throughout the business.”

“It is clear that there has been a material shift in trade and whilst it is too early to predict with precision where a new post Covid sales mix will settle, we must act now to reflect this change,” added the company, which was founded in 1884 and now operates in 62 international markets.

The retailer said it has learned that employees can work more flexibly, and that some can transition between its food and clothing and home departments. New technology in stores has “enabled us to reduce layers of management and overheads in the support office,” it added. The company expects a large portion of the reductions to be through voluntary departures and early retirement.

Marks & Spencer is the latest UK retailer to slash jobs, as the pandemic crushes clothing sales and accelerates a shift to e-commerce that was already hurting physical stores. TM Lewin, Harrods, Topshop owner Arcadia and Walgreens-owned pharmacy chain Boots, last month announced up to 5,800 layoffs between them. Even Selfridges has been forced to retrench, announcing 450 job cuts last month.

Britain is facing a growing unemployment crisis, with the Office for National Statistics saying last week that 730,000 jobs have been shed since the coronavirus pandemic shuttered businesses in March. British Airways is slashing 12,000 jobs, or more than a quarter of its workforce, in response to the severe drop in travel demand during the pandemic. BP is slashing 10,000 jobs, and 9,000 are being eliminated at aerospace and engineering company Rolls-Royce.

Marks & Spencer CEO Steve Rowe said in a statement that the changes announced Tuesday “are an important step in becoming a leaner, faster business set up to serve changing customer needs.”

The company said it expects to create a number of new jobs as it invests in its online business, in food retailing and in reshaping its store portfolio.

The group posted a 19.2% decline in revenue between the end of March and August 8, compared to the previous year, reflecting the collapse in sales of clothing and home products. Lockdowns closed stores for several months, and a 32% increase in online sales was not enough to offset the decline. Sales have improved since stores reopened in June, but remain significantly down on last year.

Nearly 2 million new customers have shopped online since the start of the year and online purchases have accounted for 41% of clothes and household goods sales over the past eight weeks, the company said.

Marks & Spencer said that sales in newer, out of town stores have almost recovered to last year’s level, while stores in town centers and some shopping centers are still “heavily impacted by social distancing and reduced footfall.”

Up to 250,000 Britons are waiting on coronavirus test results as Matt Hancock admits

Sun Sep 20 , 2020
Massive queues built-up outside coronavirus testing centres in England today as the government’s shambolic swab system descended into further chaos and Matt Hancock was forced to admit the fiasco will last for several weeks. Long lines were pictured at sites in Southend, Bury, Birmingham and Manchester as the Health Secretary […] 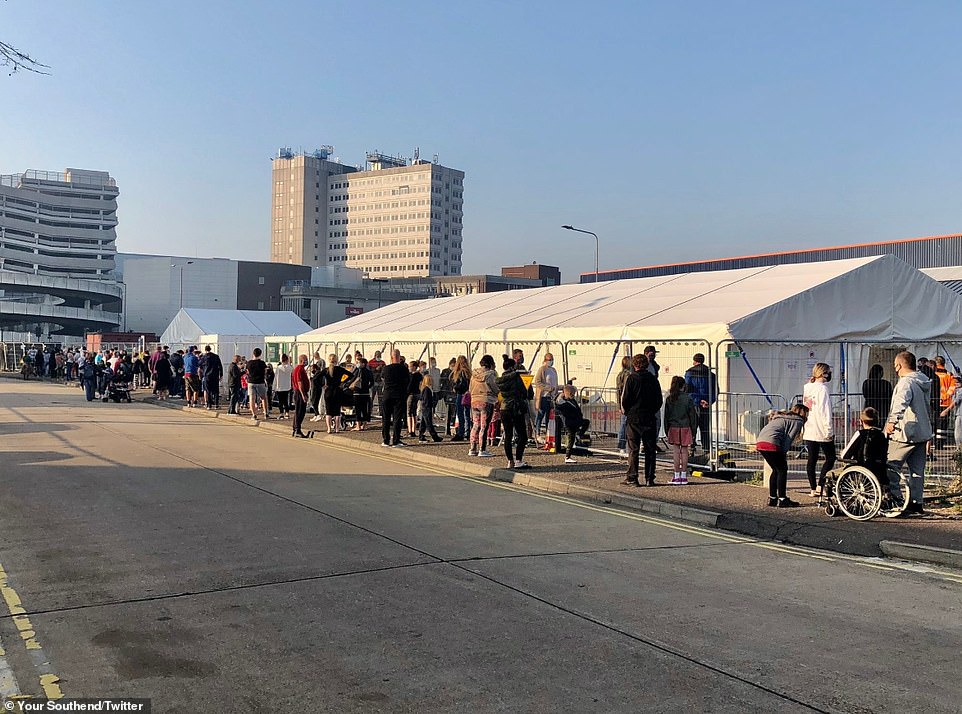